A Thousand Years of Plenty,
Great White Throne Not Funny

Contents: Satan bound for the Kingdom Age. The first resurrection. Satan loosed at the end of the millenium, and his final doom. The judgment of the great White Throne.

Conclusion: When the Tribulation days have run their course, Messiah Jesus will come back to earth with His saints, and having cast down all opposing powers, will fling Satan into the bottomless pit for a thousand years. During that time Messiah, with the saints, will rule over the earth. At the end of the millenium Satan will be temporarily released, but he and his quickly gathered followers will be cast into the lake of fire forever. At that time also the unsaved dead of all the ages will be resurrected. After being judged according to their works they too will be given their portion in perdition. Just as their are varying rewards in heaven, so to their will be varying penalties in the lake of fire.

Striking Facts: Revelation 20:4,6 – Christ is seen in this chapter as the Judge and also as the Messianic King. Those who are associated with Him in this Kingdom will be the Church and the Tribulation saints. Those who are now being called unto Christ are therefore appointed, not to be subjects of the Kingdom, but co-rulers, priests of God and of Christ, and will have their specific work in connection with the work of His universal empire.

The Memory Hooks were created by Pastor Steve Troxel, founder of Shepherds’ Support. 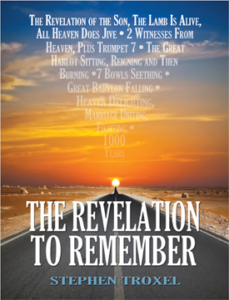 Revelation 21 – New Jerusalem, No Need of the Sun
Scroll to top