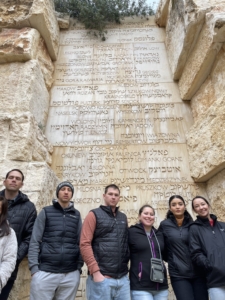 February 19th, we returned home following 13 days in Israel with 15 people. Mornings started around 6 A.M. reading of Scripture, the book of Matthew. We were on the road before 8 A.M. Following a full day of touring, we met after dinner for WOW time. “WOW” stands for worthy of worship. Each person took the opportunity to share where and how God showed up throughout the day. The days were rich and full, ending around 8 P.M. Keith and Alice have taught us, “don’t waste fun.” We didn’t!

Today, everybody wants to be heard. It is hard to separate facts from personal perspectives. Beyond the sights and delights of Eretz Yisrael was the refreshment of drinking deeply from God’s living water, outside the reach of commentator and prognosticators. Freedom! Towards the end of our time in the land where heaven met earth, where bones and skin covered God’s glory, the realities of the outside world encroached once again. While our concerns drifted from COVID clearance to boarding the plane for home, Russia prepared to invade Ukraine.

The Bible is an ancient book written by and to an ancient people group, the physical descendants of Abraham, Isaac, and Jacob. Our tours follow the storyline of the Bible. Walking backwards from the story of Jesus to the time and turf of Abraham is the focus of the first day when one tours Israel with Disciple Daily. The journey requires a bit of biblical chiropractic work. Initially, it’s not always pleasant. But to understand Jesus, one must move from the 21st century to… “in the beginning, God.”

Eugene Postolache, from Moldova, joined our Israel Expedition. When I first met Eugene, he was single and a bit opinionated—constantly questioning, always challenging. We have been good for one another. I now see the world through Eugene’s eyes. His are complementary to mine. We both are reconciled to the fact that while the Bible was written for us, it was not directly written to us.

This perspective drives disciples of Jesus to look at the world through His perspective, not our own. It allows us to answer questions honestly. Questions like, “What in the world is happening in Ukraine? How is it possible for God to use COVID for His glory? If God is good, why has He allowed so much bad, like a global pandemic and worldwide political paralysis in response to Russian expansionism in Ukraine?” To these questions, my answer is “I don’t know.” The Lord is writing these modern stories. It’s His story, not mine. 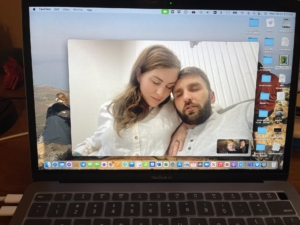 If the story being written is not ours, how then do we pray?

As the story of Israel demonstrates, “the LORD is God, the LORD alone.” He does not share His glory with anyone. He does with nations and individuals as He pleases. His will transcends what we want, even what we think we need. When we begin to see things around us from the perspective of His will, He changes our hearts and the way we pray.

Often, the prayers of those claiming Christ devolve into self-serving mindless chatter. When we have a clear perspective, we start praying according to His will by looking at life with His eyes. What is God’s will? His heart, His plan, His work as revealed in the Bible? The prayers of saints grounded in the knowledge of His Word are the prayers He answers, frequently giving us what is asked. If it is not in His will, He will use the Scriptures to reframe our prayers, making His will ours.

The current situation in Ukraine provides an intimate look at how God is answering the prayers of His people in Ukraine. Andrii and Ellissa Petrenko prayed for the Russian leadership to turn away from war. But, they never lost sight of the fact that God is good, even in the midst of horrifically demonic destruction. The Petrenko story has put a face to the war in Ukraine. Their plight is known globally through a story written by a San Antonio Express News affiliate. A local television station picked up the story. Separated from his wife, Andrii forcefully declared that God is in control and still the worker of miracles. Not long afterward, Andrii and Elissa were reunited in western Ukraine to plan where their baby will be born in the next few days. The Petrenkos and Postolaches are standing strong because they kneel to the will of God in prayer. 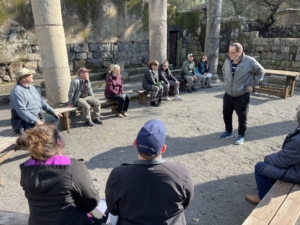 As Jesus Followers reframe their prayers to align with God’s will, their lives become something worth watching, particularly so for those who do not know Him. Made in God’s image, we were made to rule over this world. In the Garden of Eden, Satan successfully sidetracked our rule. However, when we become new creations at the moment of our trust in the work of Christ alone… our role of rulership is restored.

Think about the Petrenko story.

That’s our story and we’re sticking to it!

While Disciple Daily played a small role in all of this, our role is only part of God’s story, a fantastic story He continues to write even today. That’s the story we want to be a part of. He gets the glory; we get to watch. Join us, will you?