Today is the first day of Chanukah. It began last night at sundown. The eight-day Festival of Lights commemorates the rededication of the Temple in Jerusalem following the Jewish war of independence with the Syrian Greeks. Jewish forces under the leadership of Judah Maccabee defeated those commanded by Antiochus Epiphanes (meaning God Manifest). The “Hammer” restored the Temple to Jewish control and the worship of God in 164 B.C. While not one of the proscribed Feasts of Israel by God, John 10:22-23 records that Jesus observed Chanukah like the rest of His people.

Israel has always been the site of great conflict. Nothing is new about this. The recent announcement by President Donald Trump of his intention to move the Embassy of the United States in Israel to Jerusalem has elicited reactions both emotional and violent. Over the next eight days, I will be releasing a series on the complicated story of this land of conflict.

I have had ample opportunity to study the history of the Middle East. When discussing current events of the region, it is clear that most people are uninformed about who and what is fueling the eternal conflict over Eretz Yisrael. One factor is the tribal culture of the Middle East. One’s primary allegiance is to their family, both nuclear and extended. Every effort is made to bring honor to the family, not shame. Personal interests are secondary. Tribalism is one of the many Middle Eastern realities missed by western observers. Making one’s decisions based on whether or not their actions will shame or honor their community is an alien concept to the individualism of Western culture.

The millions of people identifying themselves as “Palestinians” are both players in and victims of an eternal conflict. They have been manipulated by princes and presidents for the last 150 years for political purposes. Their real-life circumstances are so unsettling that the contributing facts concerning this tragedy don’t seem to matter any longer. What has happened to this people group is a tragedy.

The purpose of this series of posts is to offer a concise overview of the actual history of the lands both Jews and Arabs lay claim to in the modern State of Israel. To understand where we are now, we must explore the origins of the Middle East conflict. We need to journey back in time if we are to make any sense of it all. For our purposes, we will begin with the Jewish expulsion from the land first promised to the descendants of Abraham, Isaac, and Jacob forever in Genesis 12, 15, and 17.

Many people of diverse backgrounds visit Disciple Daily. Conversations are encouraged. Those participating in this ongoing post must be respectful of others. Profanity will not be allowed. Respect is expected. Unfounded facts and distortions will not be left unchallenged.

Just 40 years after Jesus walked the dusty roads of the Promised Land, tragedy struck. Josephus was a Jew who commanded resistance troops during the Jewish uprising against Rome in 66 AD. Nero sent Vespasian and Titus (Vespasian’s son) to crush the rebellion in Israel. Seeing that defeat was inevitable, Josephus betrayed his troops. The lone survivor, Josephus was taken to Rome as a highly valued slave. Because of his education and knowledge of the Jews, he became a respected adviser to the Romans. His Wars of the Jews provides critical background to this period. While a traitor, it is Josephus’ documentation that informs much of our understanding about the dynamic tensions of his day.

Moving south from the Galilee, Titus destroyed Jerusalem and its Temple in 70 A.D. Jews were chained together and taken for sale in the slave markets of Rome. Others fled their home country, resettling throughout the known world. Over the next sixty-five years, most Jewish people disappeared from Eretz Yisrael, the result of Rome’s continued suppression of previous Jewish freedoms. A significant Jewish presence ceased to exist in the land renamed “Palestine” by the Romans in 135 A.D after a second uprising was put down. The name change was part of Hadrian’s plan to completely erase any identification of Israel as the homeland of the Jewish people.

Refugees from Israel found pockets of Jews living throughout the cities of Asia Minor (Turkey) and Europe. By some estimates, a huge percentage of the population of Asia Minor identified themselves as “Christian” within 100 years of Yeshua’s resurrection and ascension.  Much of this numeric growth is rooted in the fact that belief in Jesus originated among many Jews living throughout the Empire. They became active witnesses to their pagan neighbors. The spread of the Gospel is directly related to the dispersion of the Jewish people from their Promised Land and the persecution of the Church, viewed as a sect of Judaism by Rome.

In 285 A.D., Diocletian split the Roman Empire into two halves, western and eastern. He persecuted the Christians without mercy. It was the worst persecution of the Church in Roman history.

The son of one of his political rivals, Constantine grew up in Diocletian’s court. Over time, Constantine distinguished himself at home and on the battlefield. A charismatic troop commander, Constantine became a threat to his superiors. He fled Gaul to join his father who had been appointed Caesar in Britain by the emperor of the west. After Constantius’ death, Constantine took his father’s position by the acclamation of his army. He immediately started enlarging his area of influence.

With his army marching on Rome, Constantine is reported to have had a vision of Jesus carrying the cross saying, “With this sign, you will conquer.” On October 28, 312, Constantine’s army took the field of battle. With the cross emblazoned on their shields and helmets, the ensuing battle was brief and decisive. Constantine entered Rome the next day. In fear for their lives, the Senate proclaimed him the “Greatest Augustus.” Constantine began to elevate leaders from the recently persecuted Church to positions of power.

Constantine is a curious figure in world history. Did he convert from paganism to Christianity? Only God knows for sure. However, it is undeniable that the world changed as a result of his rule.

The old gods of Rome died hard. Great tension surfaced between Constantine’s new advisers and those who had previously been in power. In 324 A.D., Constantine transferred the capital of the eastern empire from Nicomedia to Byzantium where he took up residence, extricating himself from the religious and political bickering of Rome. Later, Byzantium received a new name, Constantinople. Today it is known as Istanbul, the capital of Turkey.

Seeing the rapid growth in the numbers of “Christians,” Constantine sought a way to take advantage of their growing favor among the masses. By 325 AD., Christianity was the de facto state religion of his empire. Unfortunately, the newly institutionalized “Church” created problems for itself. The corrupting influence of power and wealth led to bishops and priests oppressing their flocks for personal gain. Tensions grew.

The Jews have always been an easily identifiable political target. Church persecution of Jewish “Christ killers” became a way to vent the angry pressure created by the absence of authentic pastoral care for the sheep of God’s flock.

The rising wave of Christendom’s anti-semitism made no distinction between the Jews who believed that Jesus was the long-expected Jewish Messiah, and those who did not. It was at this point in history that the Church cut off all ties with her original Jewish roots. The original understanding that the Scriptures were Jewish and the fact that they must be interpreted accordingly disappeared from Christendom. In an attempt to fill the theological vacuum this created, Emperor Constantine convened a council of Church leaders. None of the Jewish leaders of the Church were invited to attend. Their objective was to distill Christian doctrine into teachable creeds that did not rely on the teaching of the Old Testament, the Hebrew Scriptures. 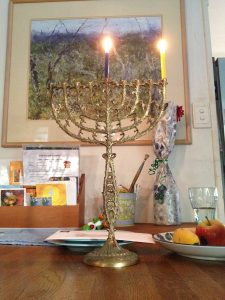