Return To The Promised Land

Today is the third day of the eight-day Jewish holiday known as Chanukah. The biblical calendar of the Jewish people is a solar/lunar calendar with 28 days each month. Every few years an extra month is added to keep the holidays in the season they were intended. Chanukah is a winter holiday that always falls around Christmas. In the time of Jesus, Chanukah was called the Feast of Dedication.

Throughout the Chanukah holiday, candles on the Chanukiah, a nine-branch menorah, are lit at sunset adding one each evening until the end of the festival. The center candle, the Shamash, is lit first every night. Shamash means servant. The Shamash is then used to light the candles appropriate to that evening’s celebration.

In many churches around the world, Christmas Eve is celebrated by a candle lighting ceremony. Candles are lit throughout the congregation, one candle at a time from one candle until the whole room is aglow. This practice did not originate in the Church. It is the way Chanukah has likely been celebrated since long before the Church began to celebrate the birth of Jesus at this time of year.

The enemy must be identified and studied to win a war. As is often the case, the nations of the world are ignorant about what the conflict in the Middle East is all about. They don’t even recognize the primary antagonist.

Satan knows Scripture better than any follower of Jesus. He knows where the front line of His war with God is. He is doing everything he can to thwart God’s glorification of Himself through God’s blessing of the entire world through the greatest descendant of Abraham, Isaac, and Jacob.

At the center of this cosmic battle is a physical place. The Middle East conflict is demonically inspired. Satan wants to rid the world of the Jews. God’s oldest adversary, Satan, enlists that portion of the human race living in rebellion against God to accomplish his objectives on planet earth. Satan’s objective to steal God’s glory has never changed. But, God even uses Satan himself for His purposes.

The Crusaders were defeated and thrown out of the Holy Land. For hundreds of years, nobody wanted the land eternally promised to the Jewish people until a recurring phenomenon raised its ugly head in Eastern Europe. Home to the largest concentrations of world Jewry, the people having the distinction of being the world’s most systematically persecuted people group find themselves in a familiar situation.

In the 1800s, the tyrannical oppressors of Eastern Europe and Czarist Russia needed a scapegoat to deflect the rising anger of their subject masses. Because of their unwillingness to be assimilated into Christendom’s societies, the Jews are an ideal choice.

After almost 2,000 years in exile, many of the children of European Jewry began to turn their hearts once again towards “Palestine.” Jewish leadership realized that the only place Jews would be safe was in a land of their own, the land that had previously been their homeland. The almost two-thousand years of Jewish persecution toughened the resolve of those men and women. Persecution had prepared them for the many challenges that lay ahead.

Many had lost their ancestral faith in God. They returned home with a new faith. Their god was the land itself. Theirs was a collective mentality fueled by the likes of Lenin and Marx. A secular movement known as Zionism had been born. Its adherents were as zealous as their forebearers had been in their battles with the Philistines, Assyrians, Babylonians, Greeks, and Romans.

The land lay barren and devoid of many inhabitants. The new Jewish zealots set themselves to the task of creating one of the greatest miracles of the modern world. They drained swamps to create a subtropical paradise in the Upper Galilee. They cleared rocks, planted wheat fields, and raised cattle. They grew unbelievable citrus and vegetables. They started fish farms. In the southern desert, they developed hydroponics and raised food crops there too! This is the miraculous story of an industrious people with their backs against the wall.

They didn’t know that the God they most of them had forgotten was using them to accomplish His own will for the land and their people. What they were doing had been written about long before by Isaiah, Daniel, Jeremiah, Ezekiel, and other Old Testament prophets.

Contrary to a lot of intentional misinformation, the Jews did not take the land from the Arabs living on it. As mentioned in the previous posting, Mark Twain had reported there weren’t many people living in the countryside. Many of the poor Arabs on the land had sold their property to wealthy Arabs in Beirut, Cairo, and Paris. They turned around and sold the property to philanthropists from Europe and America. The philanthropists gave the land to Jews who were willing to settle in the hostile environment and make it a land flowing with milk and honey once again.

The old saying “a rising tide floats all ships” characterized what happened in the Eretz Yisrael during the early 1900s. As the land became productive everyone benefited, Jews and Arabs alike. Living conditions became better for everybody.

Back in Europe, conditions worsened for the Jewish people during the first half of the 20th Century. Two world wars took their toll. The number of Jews coming to Israel escaping this tragedy escalated. The number of people coming into the region started to threaten Arab sensibilities.

The Ottomans were crushed during World War I. France and England shared the land Saladin and Suleiman once ruled. Based on the need of the moment, they each made promises to the Arabs and then turned around and did the same thing to the Jews. When it was in their kingdom building interests, the nations of European Christendom played the Arabs and the Jews against one another. These were two of the countries that had launched the earlier Crusades.

With the exception of Egypt, the Middle East had for centuries been home to Arab tribes with no clear-cut borders. Following WWI, France and England, with the stroke of a pen created Jordan, Saudi Arabia, Syria, Iraq, and Lebanon. None of these countries existed as nation states before 1932. To create them, the British and the French put different tribes with conflicting loyalties together in an area. They were shown maps with national borders and told who their leaders would be. Although they had been fighting each other for hundreds of years, nomadic tribes were expected to salute the national flag and sing the national anthem. It didn’t work then, and it is not working today. What is happening throughout the Arab world today is directly related to these historical facts.

The previous tribal leaders who were now kings and presidents needed someone to blame for their inability to govern their new nations. “Look! The Jews are stealing our land and more are coming all the time!” The Palestinian Arabs began arming themselves. Suddenly, the new Jewish settlers found themselves forced to defend their lives and the land they had worked on for years. The Arabs voiced their anger vowing to throw them off the land and into the sea.

A tidal wave of Jewish refugees headed for the Promised Land as anti-semitic persecution escalated throughout most of Europe from the late 1800s through the years immediately following World War II. The climax systematic slaughter 6,000,000 Jews by Hitler and his Nazi minions.   As the gates to Hitler’s death factories opened, decimated prisoners frantically looked for a place of safety. From the displaced person’s camps, many Jews made plans to immigrate to America. Others made their way to Eretz Yisrael.

England, the ruling authority over Palestine, suddenly found itself refereeing between two increasingly hostile people groups. They made promises to the Arabs. They made promises to the Jews. They kept very few of them. The circumstances that led to the Balfour Declaration are a prime example. Placating the Arabs who were becoming increasingly vocal and violent, England decided to close the borders to further Jewish immigration in Palestine.  But, it was too late. Their historic homeland was calling.

Truth be known, God was calling them too. And He still is! 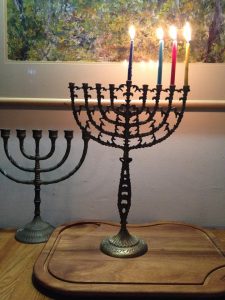