On Christmas Eve, Noemí and I drove around looking at Christmas decorations in our neighborhood. This time of year, many homes display nativity scenes. Us included. Their purpose is to publically testify to observant outsiders that one baby, born 2,000 years ago, grew into the most influential man the world has ever known. No one else is even close!

Anachronism – a thing belonging to a period other than that in which it exists.

Modern nativity scenes contain several misleading anachronisms. If you have been to Bethlehem, you have seen that trees large enough to build wooden buildings don’t exist in the area. The place where Jesus was born was likely not to have been a stable, but rather a cave. Feeding troughs were made of stone, not wood.

Most nativity sets present another anachronism, three observant outsiders. The Magi were not in Bethlehem to witness Jesus’ birth. They didn’t arrive for about two years. And where did the idea of three wise men originate? You may be thinking, “OK, so what? What possible difference does all of that make?”

Magi (magus) – the name given by the Babylonians, Medes, and Persians to wise men, teachers, priests, physicians, astrologers, interpreters of dreams, and more

Matthew’s gospel provides the story of the magi arriving in Jerusalem after seeing a strange star in the night sky. According to Matthew 2:7, 16, the magi informed King Herod that they had first seen the star two years earlier. They knew that that particular star signaled the birth of a king, a king of the Jews. This child would be no ordinary king. The magi had traveled over 1,200 miles to see Him and to worship Him.

What did the magi know?

Look again at the magi of your nativity setting. Think. The presence of the magi should elicit certain questions. The magi look different than Mary, Joseph, and the shepherds. Their dress was strange, their language was foreign, and they were very wealthy. What were they doing in a cave filled with smelly animals and a homeless couple with a new baby? Who were they? Why did they come? What did they know that most of us today still don’t?

Five hundred years before the magi’s arrival in Israel, a young Israelite named Daniel was taken captive by the Babylonians.

Daniel believed in the One God, the Creator of the world, the God of Abraham, Isaac, and Jacob. He also knew the Hebrew Bible, meaning that he knew the prophecies concerning the coming King of Israel, the future King of the whole world.

Taken captive in Judah, Daniel was an observant outsider to life in Babylon. Over time, his knowledge and integrity came to the attention of Nebuchadnezzar. In the court of Nebuchadnezzar, Daniel rose from slavery to become the king’s highest advisor, an intimate insider. He was appointed Chief of the Magi. Daniel was a well-known predecessor of the magi who came to see Jesus.

As a man of great influence serving Babylonian and Persian leaders, Daniel introduced the other magi of his time to the Hebrew Bible. When the star appeared in the sky over Chaldea 500 years later, magi from the schools where Daniel once taught knew what it was, what it signified. They remembered Numbers 24:17, a Star from Jacob.

The magi came looking for the King. They were no longer observant outsiders. They came to worship the One they would follow as intimate insiders for the rest of their lives. They brought gifts they had prepared of gold, frankincense, and myrrh. They traveled hundreds of miles from Mesopotamia to Bethlehem (Micah 5:2).

Maybe you have a nativity set in your front yard. Soon, you will take it down. But what will the observant outsiders of your neighborhood conclude about the gifts you are bringing to your King in 2021, the One who is coming soon for the second time? 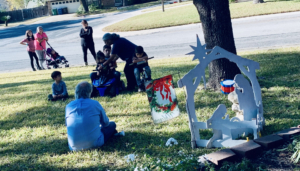 We have resources and tools we use when we disciple others. Let us share them with you. By joining our team, you will get:

As a bonus, team members receive our free downloadable book Jesus, From Genesis to Revelation.

All the resources we offer on this website are FREE. We encourage you to use them as you disciple others. That’s what God created us to do!

Talk Thru the Bible – Nations

Talk Thru the Bible – Intro2
Scroll to top