I have always wanted to surf, to feel the power of what was once a small swell growing in size and strength as it nears the shore. Chances are not high that on this side of eternity I will ever know that feeling. But this year, I have experienced something even better. The Lord used Disciple Daily to build His Kingdom. It too is growing in power and strength. 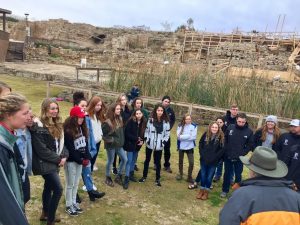 For the last eleven years, we have been part of a year-long residential discipleship program at T Bar M Camps in New Braunfels, TX. We trained the Timothy Team to teach the Stories of God series in their own camp ministry. They also learned Walk Thru the Bible’s memory system to help recall the major people, places, and events of the entire Bible.

Throughout the fall we trained together. In January we spent 15 days exploring Israel from Dan to Beesheva solidifying their understanding of these stories in the places where they happened. This year almost 7,000 young people participated in T Bar M’s summer camp programs where they learned some of what we taught the Timothy Team.

Spotlight – On the flight from Newark to Tel Aviv, two Orthodox Jewish families listened to a Timothy Team member tell the Story of Creation. A friendly free-flowing conversation followed.

Spotlight – An Israeli women’s synchronized swimming team joined us at Caesarea Maritima. Some of these young ladies may well compete for their country in the next Olympics. Jewish and Gentile young people found common ground through a series of engagement games that led to the Story of the Fall. A discussion ensued about the sacrifice God made to cover Adam and Eve’s sin and the future defeat of Satan through the Seed of the Woman.

The Lausanne Consultation on Jewish Evangelism is a global network of Jewish and Gentile believers collaborating on Gospel proclamation to the Jewish people. This year we were invited to make a presentation on the Jewishness of Bible storytelling and its use as a disciple-making strategy with God’s Chosen People.

Spotlight – During this conference, God introduced us to Allyson Dresner, the designer of our new website. Ally has sharpened the way we tell our story and find potential ministry partners. If you are in need of a savvy technology savant, we highly recommend Ally. 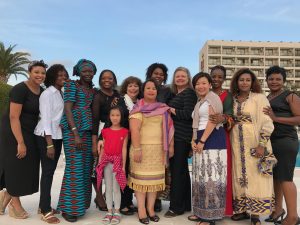 We are all stronger and more productive when we partner with other believers to extend the Kingdom of God. Twenty-eight sports ministry leaders from twelve African nations participated in a joint project of Shepherds Support, the International Sports Leadership Coalition, and Disciple Daily. As a team, we provided training about how a healthy Christian marriage can be a powerful disciple-making tool.

Spotlight – Each afternoon a young Muslim man named Army led an exercise session for our group. He had many questions about who we were and what we were doing in Turkey. Army was very open to listening to one of our Stories of God. Because of his interest, we gave Army a Bible. He promised to begin reading it. With excitement, Army told us later that he had started.

The purpose of the first part of this trip was to invest in one of our story champions in Chisinau, Moldova’s capital. During the second half, we were invited to teach at a month-long training of strategic sports ministry leaders of the Eurasian Sports Coalition.

Spotlight – Eugene Postolache is a dynamic disciple of Jesus Christ working with the Admirals Basketball Academy. Keith Myer of T Bar M Camps joined me as we participated in his ministry and did life together for six days. This unprogrammed approach to life-on-life discipleship is the one Jesus modeled.

Spotlight – The highlight of our time with the Eurasian Sports Coalition was a camping trip with thirty young disciple-makers from six Eurasian countries. It was inspiring to watch these already proven disciple makers practice the art of teaching the Story of Creation in the Edenic beauty of our Moldovan campsite. 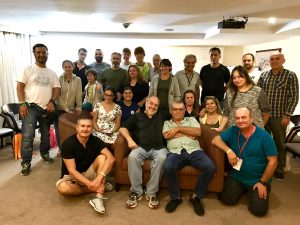 During our time in Moldova in July, Disciple Daily was invited to participate in a Disciple Making Movement (DMM) conference in Turkey. Turkey is an increasingly dangerous place for followers of Jesus. The government views them as potential religious terrorists. Estimates are that only 4,500 evangelical believers are present in the entire country. Twenty-six of them participated in this training time.

Spotlight – This conference took place in the same location as the earlier Turkish event. Army, the previously discussed Muslim man, recognized me and asked about some of the people he had met earlier. He had more questions but had not been reading the Bible we gave him. Please pray for Army in Turkey.

From Turkey, I flew to Kiev, the capital of Ukraine. Andrii Petrenko is one of the strategic leaders of the Eurasian Sports Coalition. Andrii took me to Shostka, his hometown. He hosted me in his apartment for six days for the simple purpose of having a look at one another’s day-to-day lives. We are brothers at arms. This type of interaction is where a Proverbs 27:17 relationship is most impactful. I learned from Andrii through shadowing his daily activities as a soccer coach and discipler. He learned from me as we studied the Bible, prayed, and did life together.

Spotlight – Each week Andrii hosts families of the players he coaches in his apartment for dessert and tea. Along with Andrii’s parents, two families from orthodox backgrounds joined us for an evening fellowship and Bible study. I was to present one of the Stories of God, but God had other plans. Andrii has been working with these families for several years, discipling them towards their initial belief in the Gospel. One of the fathers had a question about repentance. “What must one “do” to have a saving relationship with God?” What was the result of the conversation that followed? Both fathers professed their own belief Jesus for the first time!

Orality Is Our Strategy

Storytelling is not just for children. The oral teaching of the Bible is the disciple-making strategy that fueled the explosive growth of the early Church. It is a method so old that it seems brand new. This way of doing discipleship allows fathers, mothers, children, non-believers, new believers and seasoned saints to come together around a table to share a meal and discuss a Bible story. It is an inclusive, non-threatening strategy that puts everyone on the same level. No one is left out. Everyone participates. It builds community.

The people we train internationally live in under-resourced countries. Some are in places where the proclamation of the Good News is illegal. The training we provide overseas is made accessible to them free-of-charge. Through people like you, God makes this possible. I am grateful!

In 2017 the wave was cresting. It was exciting. But an even more powerful one is coming this year. Grab a surfboard. Together, let’s catch the wave of what God is doing here, near and far away, through the work of Disciple Daily. 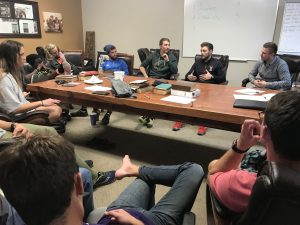 Eugene Postolache, Eugene Pogorelov, and Pasha Rozhkov are our ministry partners in Moldova and Ukraine. They helped train this year’s Timothy Team for a missions trip in February 2018. The team will travel to Kiev to teach the leadership staff of Camp Karabin how to use our Stories of God with the campers they will have with them next summer. This is what 2 Timothy 2:2 looks like in action! We trained the Eugenes and Pasha. They taught the Timothy Team who in turn will train Sergei, Ludmilla, and others in Kiev. Next summer hundred of young people will be taught these stories at Camp Karabin.

We have big plans for 2018. It will take approximately $120,000 to make these a reality. Our prayer is that God will establish and direct them by adding 1,000 new monthly donors to the efforts of our global network.

Faithful financial partners have already committed to covering our home base operating expenses for next year. 100% of what we are raising this holiday season supports our work with people like those we have discussed in this update. It won’t be used to pay for salaries, office expenses, benefit packages or anything else.

You would be amazed at the impact just $10 a month can have in the ministries of disciple makers we are partnering with in Eurasia and the Middle East. Ten dollars is the cost of one cup of coffee and a pastry at Dunkin Donuts. I am asking you to consider giving something like that up once a month and make an investment in our work here, near, and far away. We are praying for God to bless us 1,000 monthly donors who will commit to giving $10 a month to this endeavor.

Everyone that makes that sacrifice will receive access to all of the content we are giving away free of charge to our international partners.